With world-class plastic surgery training, refined aesthetic sensibilities, and meticulous attention to detail, Dr. DuPéré is an excellent choice for your surgical and non-surgical cosmetic needs. 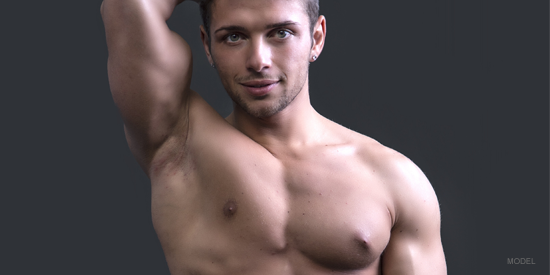 Gynecomastia — or excessive breast tissue in men — is far more common than most people realize. It can also be quite unsettling for men affected by this condition. It’s not hard to imagine the discomfort men might feel at the pool, gym, or beach, not to mention the derogatory comments they might hear from hockey friends mentioning their “man boobs.” And for the longest time, many men did not know that gynecomastia could be treated by a plastic surgeon. I perform many of these male breast reduction surgeries at my Toronto practice.

Excessive breast tissue is often a hormone imbalance, as seen in the neonate and in teenagers. Many of those cases will get better over 1 or 2 years.

Gynecomastia can also be caused by obesity, as fat loves to store extra estrogen, which then favours the breast gland development. Other causes include chronic and heavy use of marijuana and also of anabolic steroids, as seen in the body builder population. Some other prescribed medications can also be the cause. Finally, one has to rule out an endocrine anomaly such as abnormal growth either in the gland itself or a hormone-secreting lesion somewhere else in the body.

Taking a detailed patient history, including a list of medications, usually helps in finding the cause. Symmetrical lesions also point to a benign cause, along with a normal sexual history (normal erection and ejaculation).

Blood tests can be requested to assess the levels of testosterone. A testicular examination should also be performed by the family physician or endocrinologist (really, this should be done by all men on a regular basis for a general health checkup).

Gynecomastia can be treated with various surgical procedures. A fatty chest, as seen in obesity, can often be treated with tumescent liposuction alone. True excessive mammary glands can be removed via a small incision at the perimeter of the nipple area, from 5 to 7 o’clock, at the margin between the darker areola and the lighter chest skin, making the scar barely visible. For very severe gynecomastia and for people who have lost a significant amount of weight, some lifting and surgical removal of skin might also be required (mastopexy).

My practice sees a large number of men, and gynecomastia surgery is a common request. I often combine direct excision and liposuction to achieve a more masculine look. I also often sculpt the outer aspect of the pectoralis muscles to give a more muscular look. Occasionally, I will add some abdominal muscle etching or pectoral implants.

Men with excessive breast tissue should not have to feel ashamed any longer as plastic surgeons do have the tools to correct this condition. If you are interested in learning more, please contact us soon.

17 Responses to Male Breast Reduction: A Simple Remedy for Gynecomastia